An Uncle Tom’s Cabin for the Pro-Life Movement? 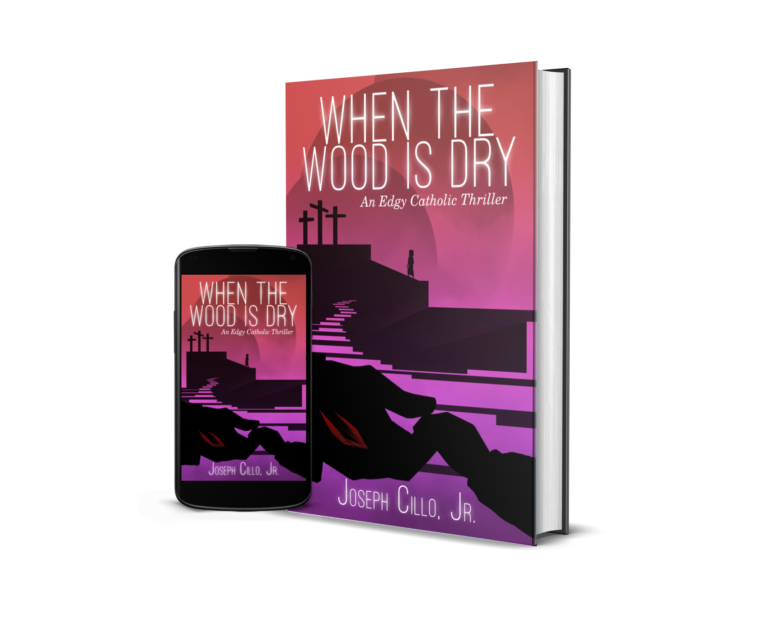 When the Wood Is Dry: An Edgy Catholic Thriller, the new book by author Joseph Cillo, Jr., explores the many circumstances that women find themselves in when confronted with the choice to terminate their pregnancies.

Written as a thriller, the action centers around Lali Russo, a Catholic high school girl, who while praying at an abortion clinic, is drawn into a world of violence and abuse she hardly conceived possible.

Visited by Jesus in a dream, Lali is called to walk in the footsteps of Christ, in this deeply religious yet provocative work. “Sometimes we must suffer if were to save souls.”  Jesus’ words from the dream echo in her mind, as she struggles to make sense of them. And with each footstep, the coming suffering looms larger, as she encounters the girlfriend of a notorious gang leader at the abortion clinic where Lali prays after school. Walking the girl home, she confronts her boyfriend as he sharpens his machete on the front porch of the girl’s home.

“Go away, little girl, this is no’ ju beesness.”   he says, as he scrapes the stone along the blade.

When I described the story in When the Wood Is Dry to a friend, he suggested that it could be a kind of Uncle Tom’s Cabin of the Pro-life movement.  While any author would be flattered to have his work compared to such an influential classic, there are indeed some similarities.  Uncle Tom, though our modern world often uses his character as an example of cowardly submission to authority, was a saintly character used as a device to communicate the horrors of slavery to a complacent and tolerant population content to look the other way.  The issue of a class of humanity being dehumanized is a parallel, though the dehumanization of the unborn is worse by degree.  Dehumanizing a person to property at least maintains a level of value consistent with the value of property.  As disturbing as that is, the pre-born human is devalued to the point of being garbage to be thrown out with the medical waste, with no value at all.

A more subtle difference, perhaps, is Uncle Tom’s Cabin’s fairly overt appeals to change the state of the laws on slavery.  When the Wood Is Dry, seldom references the state of the law and does not so overtly make an appeal for its change. While the pro-life perspective is obvious, the focus is on persuasion of the evils of abortion and the damaging effects it has on not only the pre-born child whose life is lost, but on the women who have abortions and on the minds of men in a society where abortion is freely available and actively encouraged as a solution to an unplanned pregnancy.

Any law protecting the rights of the pre-born will be difficult to enforce in a society that demands the right to unlimited promiscuity. And, while there may be many voices decrying the evils of abortion, there are far fewer decrying licentious sexuality. Demonstrating that abortion is not a satisfactory solution to the reproductive consequences of sexual activity is but a step in addressing the sickness of a society obsessed with promiscuity as a right, a norm, and almost as a virtue. The root of the problem lies in devaluation of the virtue of chastity where people are convinced of the ability of science to disconnect sexual activity from its reproductive consequences, which science can in fact do, but not without the moral consequences of a degraded society and the dehumanization of the human beings in the womb, a state of being through which all living persons have passed.

The publication of this dramatic work was deliberately timed to occur during the season of Lent.  The EBook version will be published in three parts: I. Call of the Innocent; II. Crucifixion; and, III. Resurrection. I. Call of the Innocent is currently available for free in EBook form on Amazon, Kobo, Barnes & Noble and a number of other popular sites. The EBook for the second and third parts are scheduled to launch on 4/9 and 4/23, respectively. The second part comes with a warning to readers, as it may be too intense for some readers, advising them to skip to Part III. Part III includes a synopsis that allows readers to experience the disturbing events of the second part in a less intimate way.

The author and publisher wish to warn readers without spoiling the impact for those who are more daring. At the same time, they believe this book to have important social value. So much so, that they have committed to making the EBook for When the Wood Is Dry: I. Call of the Innocent free at least until the Easter Holiday.

As the subtitle, An Edgy Catholic Thriller, suggests, When the Wood Is Dry is Edgy – Intended only for mature audiences, Catholic – includes overtly Catholic religious imagery and perspectives, and Thrilling – “full of twists and turns, action and heart-wrenching moments,” as one early reader commented.

So, is When the Wood Is Dry an Uncle Tom’s Cabin for the Pro-life movement? Only time will tell. But, with a number of northern states currently scrambling to pass laws liberalizing abortion rights and, as in Vermont, explicitly dehumanizing the pre-born, a book exploring the impact of this controversial medical procedure on the lives and attitudes of people in a completely fictional way may at least make some room for discussion while enjoying a thrilling, exciting, and impactful story.

And now, because we think this book is so special, we have decided to offer the entire EBook for FREE, permanently. The free book is available on Amazon, Barnes & Noble and other sites at this link:

And also available in a Catholic Edition with tamer language and more content specifically for Catholic readers:

The entire book is available in hardcover and paperback at Amazon and other booksellers.